June and July were busy months for students attending Mathwizard’s educational camps.  Three different camps, each aligning entertainment and learning on a specific subject, gave students in grades 2-6 the opportunity to stimulate their brains and get out of their homes for a week-long adventure. Though this first round of camps has ended, a new round is currently in session. Additionally, there are future offerings already for the fall. See below for details. 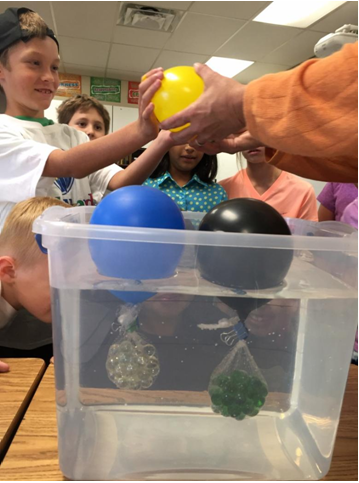 The most recent camps ran 9am- noon each day for one week at Deer Run Elementary School in Dublin, Ohio. With small class sizes (no camp had more than 20 students) and qualified educators, MathWizard provided an excellent opportunity for one-on-one enrichment.

The educational camps are a new addition to MathWizard’s repertoire. They give the students, who already attend MathWizard, a brand new curriculum to experience while they continue their regular year-long studies at MathWizardLearning Centers. Created by experienced and highly-educated teachers, the camps are designed to challenge students to collaborate, investigate, and think both creatively and critically when solving problems.  Often the students learn new games and make projects that they can share with their families and peers when class is over.

Each camp is based on one of three subjects: Writing, Math, or Science. Depending on the student’s age, they can attend one or more of the camps. The Writer’s Workshop, designed for older students, grades 4-6, is as it sounds, a camp based on writing.  It is the kind of camp perfect for young authors and those who enjoy being creative. Fictional genres, such as realistic fiction, fantasy, and mystery are introduced through short stories, writing exercises, and games. Then, working both alongside their peers and independently, the students are shown how to brainstorm ideas for their own stories. These stories are based on one of the genres learned during the camp and are revised through constructive feedback from the class. Constructive criticism is an important skill taught and honed during the camp.  At the end of the week, the students have a finished piece they are able to present to their classmates and parents. The class is a great addition to the student’s Language Arts education.

MathVenture is a fantasy world created to help students (grades 2-4) either love math or continue to love it. Focused around Mr. Matt the Magician, the students do projects and activities to help Mr. Matt become a mathematician. In doing so, the students become mathematicians themselves, venturing obstacles that involve money, time, measurement, geometry, and fractions. All obstacles Mr. Matt and the students encounter involveSTEM (Science, Technology, Engineering, and Mathematics) and logic problems.  But nothing is strictly formulaic – though many of the questions require critical thinking, they are left open-ended so that the students can be shown how creativity and math go hand and hand, and that often in the real world there isn’t a wrong or right way to solve a problem.  Collaboration and creative thinking are a key component to the camp, and group compromise is especially important to getting Mr. Matt the Magician on his way. For example, in one MathVenture named The Journey Through Math Island, the students begin by fixing a bridge together so that Mr. Matt the Magician can cross it. Later, they build a device that must get him to the top of a cliff, design a water resistant tent, and measure the distance to his next destination…all in one day! Throughout the entire week, the students are required to keep a writing log, which helps to familiarize them with using a calendar and time. The different topics (such as 3D shapes, multiplication and division, money, etc.) are introduced with everyday objects that can be applied to Mr. Matt’s adventure – whether it is crossing a bridge, learning how to fish, or selling crabs at a fish market.  Overall, the experience teaches the students that knowing math can go a long way.

The last camp already offered by MathWizard this summer is a biology-based camp for grades 3-5.  The focus is on various eco-systems and the behavior of animals, but the camp uses a combination of Science, Language Arts, Social Studies, and Art to show students the joy of biology. Using literature, interactive activities and project-based learning, the students find connections between fiction and the real-world. From the ocean to the rainforest, they explore these ecosystems and discover strange and wonderful new facts. Additionally, they create pieces that are inspired by these ecosystems, such as a scratch art craft based on the Aurora Borealis.

One example of the Eco-Explorer camps, From Saltwater to Sandstorms, begins with the students learning about the zones of the ocean and making their very own “ocean in a jar.” They also learn the importance of ocean conservation by cleaning up an “oil spill.” Later, after exploring the vast and cold tundra, they learn to “escape the ice” and make “snow slime” using chemistry. The class ends with the students creating “kinetic sand” and a “wearable adaptation,” things that come in handy with their new knowledge of the desert and its inhabitants. All camps, unique and full of creativity and adventure, help the students who participate grow and learn. These camps allow the children to socialize with peers, stay active, and have fun. Do you have any great memories from camps you attended as a child? What camps would you like to see in the future?