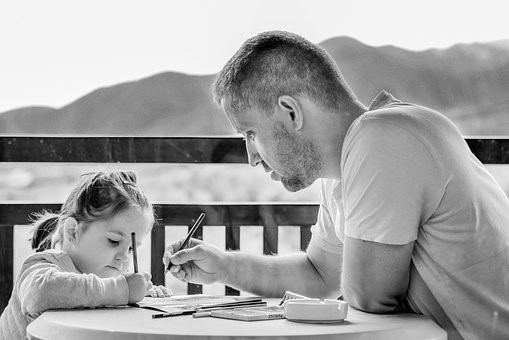 With Father’s Day right around the corner, we thought it would be a fun idea to ask the A Grade Ahead team for their favorite fathers from books (including father figures)! What’s that? You are experiencing déjà vu?  Don’t worry. That’s just because we did something similar for Mother’s day. It was so much fun that we just had to do it again – we didn’t want to leave the dads out! So without further ado, I present to you everyone’s submissions. Enjoy!

Grandpa Joe from Charlie and the Chocolate Factory, written by Roald Dahl, and illustrated by Quentin Blake:

“Although Grandpa Joe is very old, he remains young at heart. It is he who encourages Charlie to believe in his dream of finding a Golden Ticket, which leads to their adventure in Willy Wonka’s Chocolate Factory.”

Bob Cratchit from A Christmas Carol, by Charles Dickens:

“Bob puts up with a lot every day working under the miserly Ebenezer Scrooge: long hours, little pay, and less-than-ideal working conditions. However, this never gets him down, and he always has a smile for his family and does his very best to provide them with a good life.”

James Potter from the Harry Potter series, by J.K. Rowling:

“James died at the hands of ‘He Who Must Not Be Named’ while trying to protect his family – especially his son, Harry. His love for his family led him to pay the ultimate price in the name of protecting them.”

Arthur Weasley from the Harry Potter series, by J.K. Rowling:

“Harry’s life living with the Dursley family doesn’t provide much in the way of a father figure, but Arthur Weasley steps up to the plate and helps guide Harry through his life in the wizarding world.

Hagrid from the Harry Potter series, by J.K. Rowling:

“Hagrid provides Harry with his first memorable human interaction in the wizarding world. He not only rescues Harry from the Dursleys, but he also helps him buy all of his supplies for his first year at Hogwarts and helps him ease into his new world.”

Sirius Black from the Harry Potter series, by J.K. Rowling:

“Sirius is Harry’s godfather, and although their relationship gets off to a bit of a rocky start, Harry and Sirius try and make up for lost time together, with Sirius becoming much like a father to Harry as the books progress.”

“Mister Seahorse takes care of his baby seahorse eggs until they are ready to hatch. Drifting along in the sea, he also meets other father sea animals who are also taking care of their young.”

Mr. Bennet from Pride and Prejudice, by Jane Austen:

“Mr. Bennet refuses to push Elizabeth into a marriage that she doesn’t want. He appreciates Elizabeth’s intelligence and independence and loves his daughter for who she is.”

Mr. Quimby from the Ramona series, written by Beverly Cleary, and illustrated by Tracy Dockray:

“Ramona’s dad is patient, kind, and willing to do anything he can to support his family. He takes on a couple jobs that he really dislikes, but he doesn’t lose his sense of humor.”

Atticus Finch from To Kill a Mockingbird, by Harper Lee:

This character was the runaway favorite, with several nominations – all of them saying, “No explanation needed!”

What do you think? Who are your favorite fathers from books? Did we miss anyone? We would love to hear from you about your most-loved literary father figures in the comments! And on behalf of A Grade Ahead, I would like to wish every dad out there a very happy Father’s Day!

Author: Emily Karth, Program Coordinator at A Grade Ahead

Sign up to receive one email per week from A Grade Ahead full of parenting tips and helpful articles. Enter your information on the right hand side of our Blog page and we will add you to our list of subscribers. We also welcome your feedback and comments on our posts!