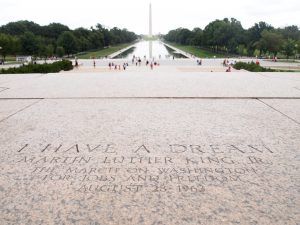 Want to teach kids about the MLK legacy in a way they can understand? These two Martin Luther King Jr. Day activities focus on key concepts with a simple, hands-on approach.

One of the first events that established Martin Luther King, Jr., as a civil rights leader was the Montgomery Bus Boycott that started on December 5, 1955, and ended December 20, 1956. Sparked by Rosa Park’s refusal to give up her seat and her consequent arrest, the protest spread across Montgomery.

The Activity: Sit or Stand

The idea of this hands-on activity is to introduce the issue of the bus system in a more direct way before discussing the details. Ideally, then, students will be more interested and more involved when discussing the historic events.

Here’s how it works:

From here, the students are primed for an introduction to Rosa Park’s protest and arrest, and the boycott of the buses led by Martin Luther King, Jr.

The Voting Rights Act of 1965 is another famous example of Martin Luther King, Jr.’s legacy. Although the 15th amendment technically gave male citizens of all races the right to vote, actual voting access was not made universally available. Polling locations forced African American citizens to meet additional requirements such as literacy tests or reciting the U.S. Constitution before allowing them to vote. Which meant many weren’t able to vote at all.

The goal of this activity is to expose students to the effects of voting.

After this activity, students should have a strong understanding of how rules like that can cause unfair results. And should be able to relate those ideas to historic voting difficulties. In fact, both of these activities could be good warm ups for a children’s book on Rosa Parks or Martin Luther King, Jr.

Do you have any favorite children’s books on these topics? What activities do you use to teach children about Martin Luther King, Jr. Day?

Author: Elizabeth F., Writer and Teacher at A Grade Ahead